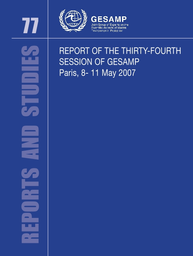 The Joint Group of Experts on the Scientific Aspects of Marine Environmental Protection (GESAMP) held its thirty-fourth session at the Headquarters of the United Nations Educational, Scientific and Cultural Organization (UNESCO) in Paris, from 8 to 11 May 2007. GESAMP was established in 1969 by a number of United Nations Organizations as a Joint Group to encourage the independent, interdisciplinary consider-ation of marine pollution and environmental protection problems with a view to avoiding duplication of efforts within the United Nations system. The main topics considered at this session are described below. 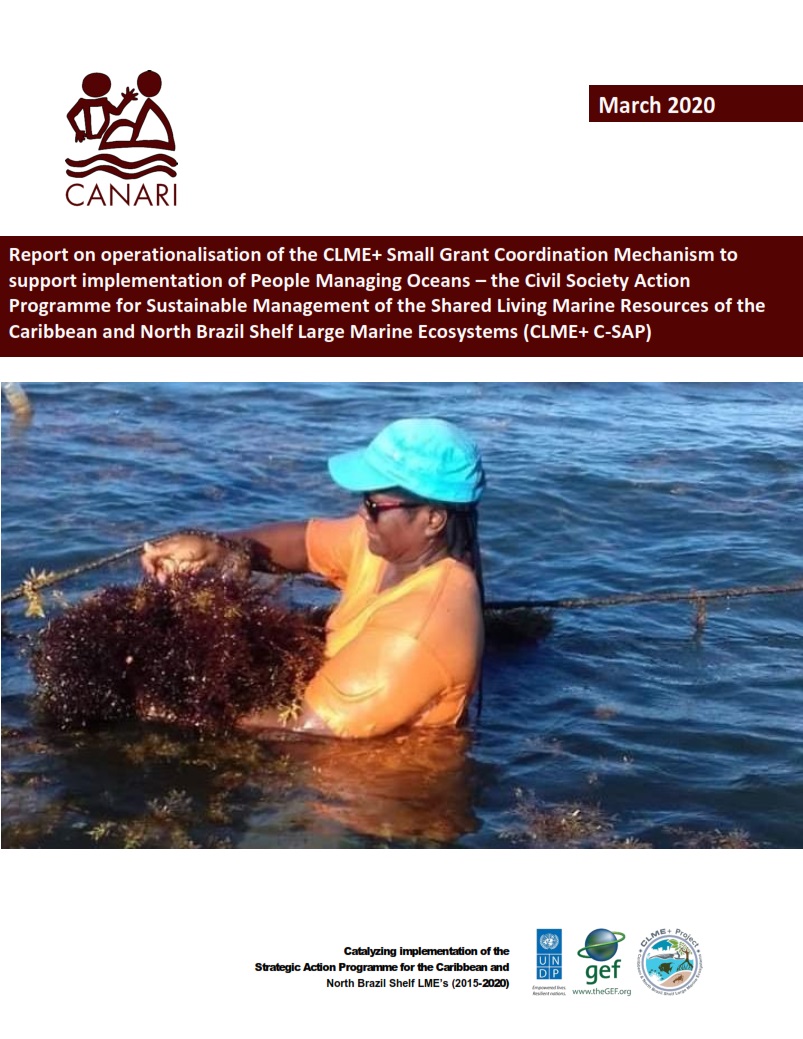 Recognizing the multiplicity of small grants initiatives funding civil society action on marine resources management, under the CLME+ Project Output 2.2. – Element #3 CANARI was tasked with exploring the development of a CLME+ Small Grant Coordination Mechanism (SGCM) to encourage mobilisation of these resources to support Caribbean CSOs and SMEs with implementation of the strategies and actions identified in the People Managing Oceans C-SAP and allow for better coordination amongst the different small grant programmes, projects and initiatives in the region.  This would address the specific needs and opportunities identified by civil society under the People Managing Oceans C-SAP while enhancing the effectiveness of funding 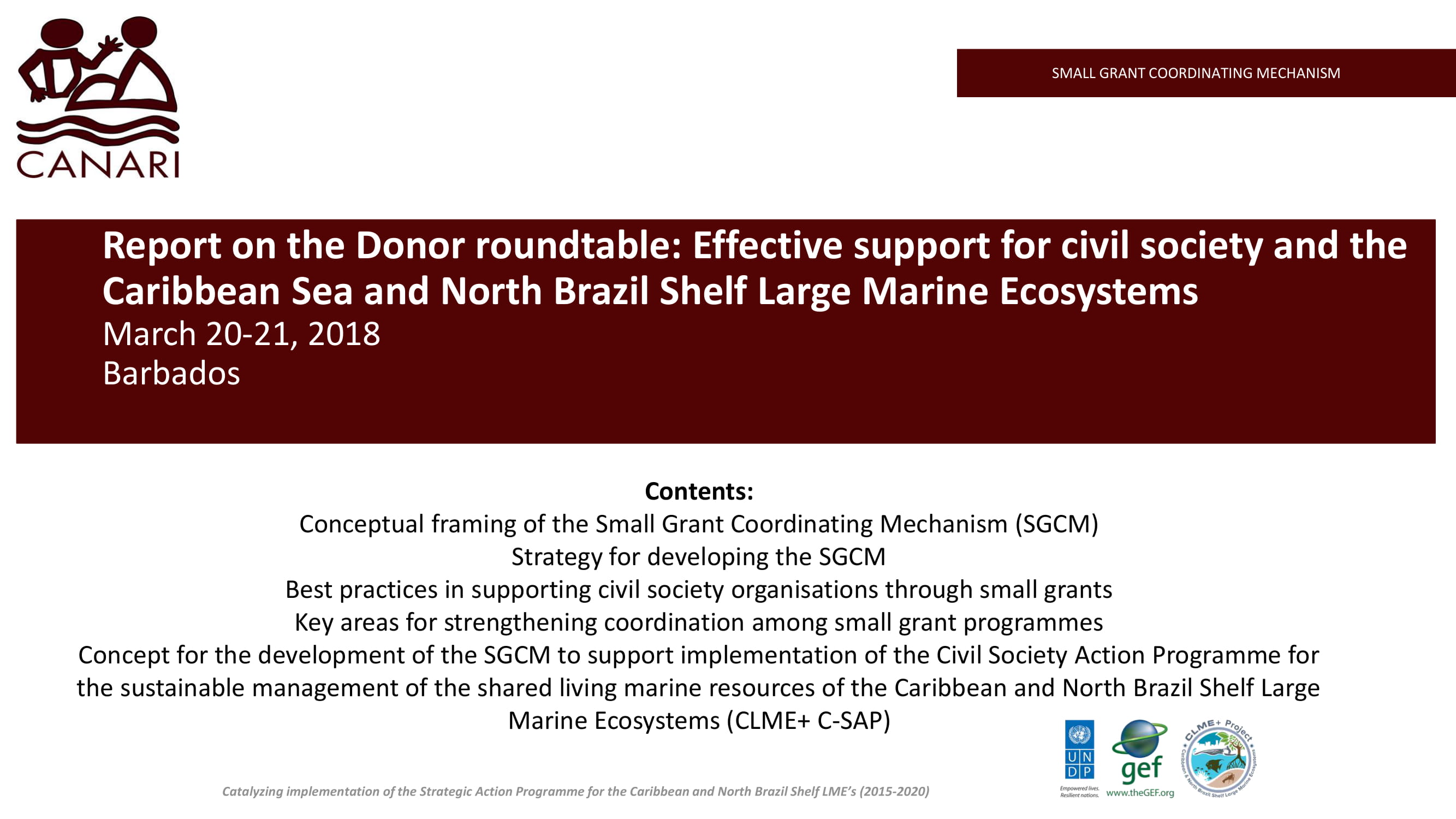 This document contains the results of the donor roundtable organized by CANARI  to raise awareness, build commitment and develop agreement on the design of a Small Grant Coordination Mechanism to support civil society’s contribution to governance and management of the living resources in the CLME+ region. This report contains a: Conceptual framing of the Small Grant Coordinating Mechanism (SGCM); Strategy for developing the SGCM; Best practices in supporting civil society organisations through small grants; Key areas for strengthening coordination among small grant programmes; Concept for the development of the SGCM to support implementation of the Civil Society Action Programme for the sustainable management of the shared living marine resources of the Caribbean and North Brazil Shelf Large Marine Ecosystems (CLME+ C-SAP) 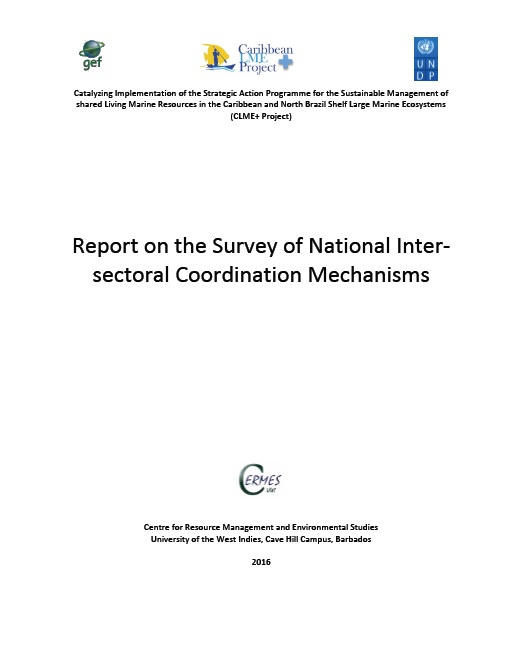 Report on the Survey of National Inter-sectoral Coordination Mechanisms (NICs)

This report contains a global rapid survey of NICs in a selection of LMEs. Evidence was gathered through review of LME project documents and email communication with LME project leaders. Ten LMEs were surveyed. The report also presents the results of the survey of NICs in the CLME+ region. 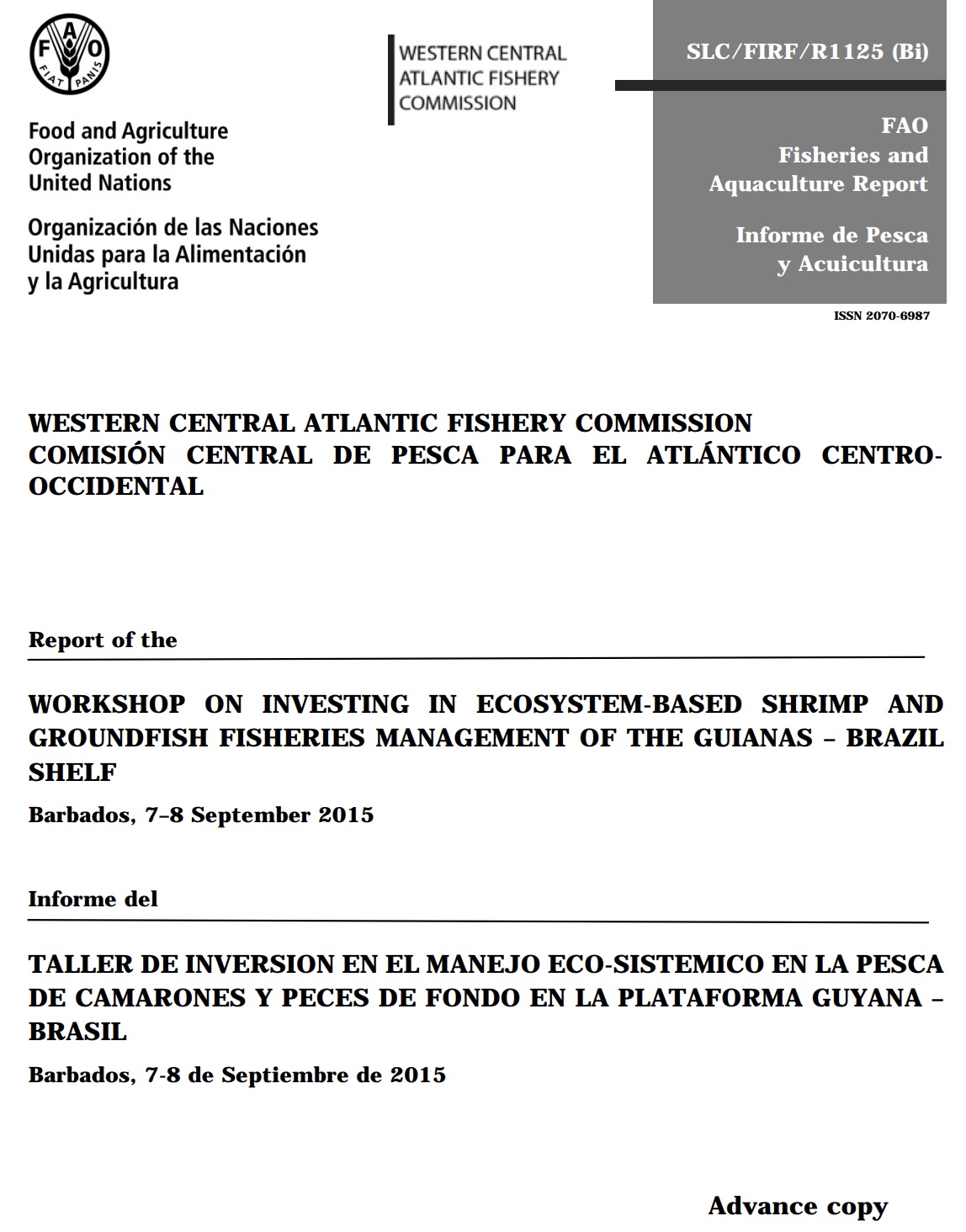 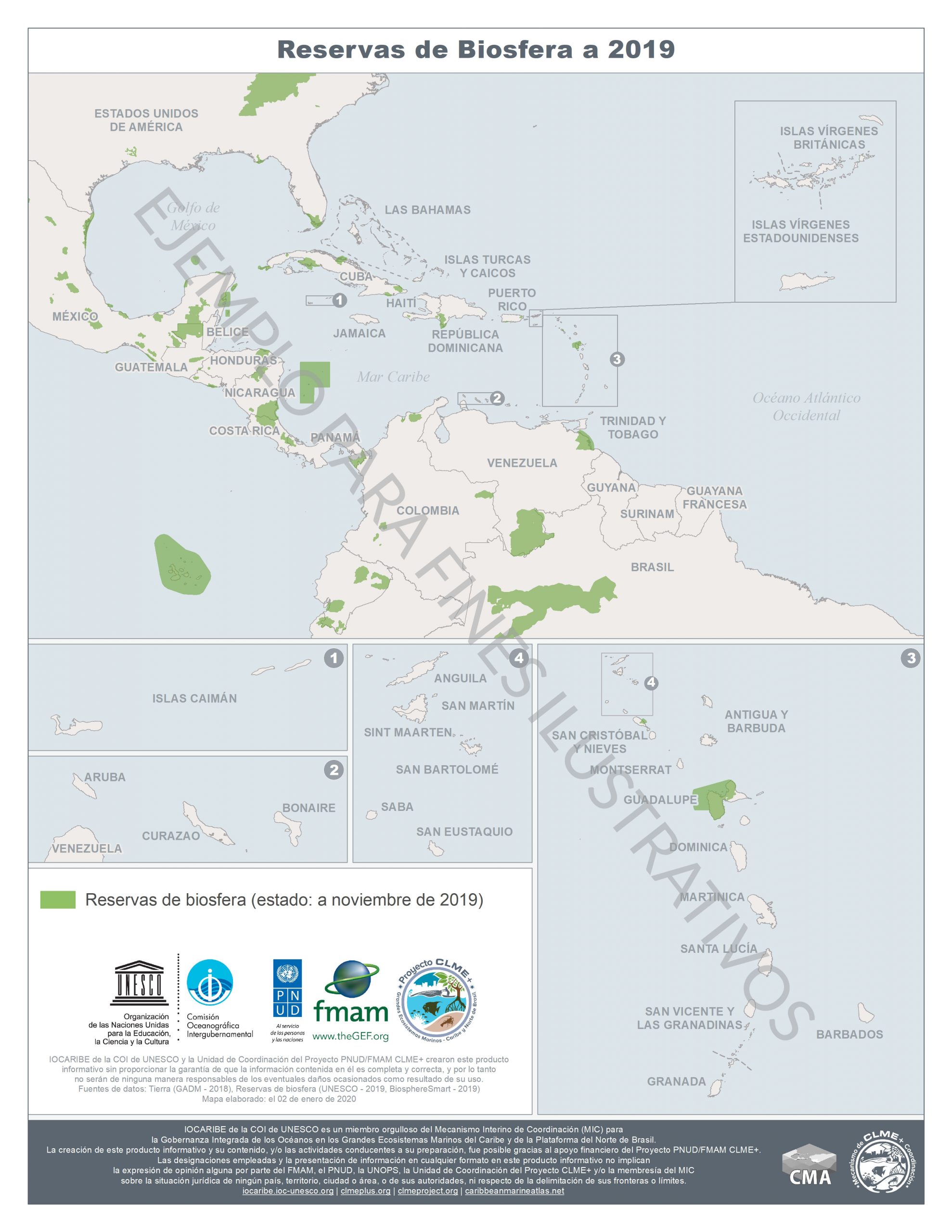 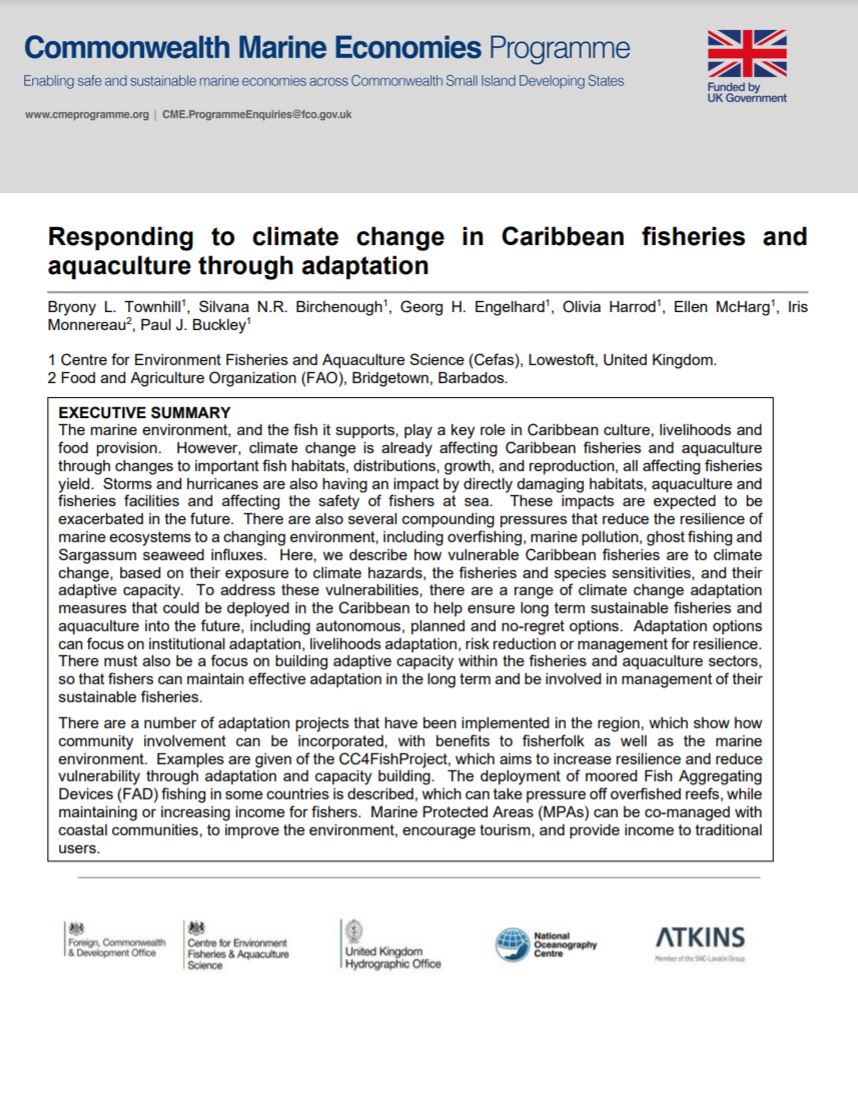 Responding to climate change in Caribbean fisheries and aquaculture through adaptation

The marine environment, and the fish it supports, play a key role in Caribbean culture, livelihoods and food provision. However, climate change is already affecting Caribbean fisheries and aquaculture through changes to important fish habitats, distributions, growth, and reproduction, all affecting fisheries yield. Storms and hurricanes are also having an impact by directly damaging habitats, aquaculture and fisheries facilities and affecting the safety of fishers at sea. These impacts are expected to be exacerbated in the future. There are also several compounding pressures that reduce the resilience of marine ecosystems to a changing environment, including overfishing, marine pollution, ghost fishing and Sargassum seaweed influxes. Here, we describe how vulnerable Caribbean fisheries are to climate change, based on their exposure to climate hazards, the fisheries and species sensitivities, and their adaptive capacity. To address these vulnerabilities, there are a range of climate change adaptation measures that could be deployed in the Caribbean to help ensure long term sustainable fisheries and aquaculture into the future, including autonomous, planned and no-regret options. Adaptation options can focus on institutional adaptation, livelihoods adaptation, risk reduction or management for resilience. There must also be a focus on building adaptive capacity within the fisheries and aquaculture sectors, so that fishers can maintain effective adaptation in the long term and be involved in management of their sustainable fisheries.

There are a number of adaptation projects that have been implemented in the region, which show how community involvement can be incorporated, with benefits to fisherfolk as well as the marine environment. Examples are given of the CC4FishProject, which aims to increase resilience and reduce vulnerability through adaptation and capacity building. The deployment of moored Fish Aggregating Devices (FAD) fishing in some countries is described, which can take pressure off overfished reefs, while maintaining or increasing income for fishers. Marine Protected Areas (MPAs) can be co-managed with coastal communities, to improve the environment, encourage tourism, and provide income to traditional users.

Degraded habitats can be improved by planting mangroves or using artificial reefs, which provide coastal protection to communities. Examples are also described of the FEWER mobile phone app which sends alerts about bad weather or sea state to fishers, providing early warning of any dangerous conditions, and of the training course provided to all licensed fishers in Dominica. Lastly, an example of monitoring for pH changes in Belize is described, so that future strategies can be developed to safeguard the conch and lobster fisheries at risk from ocean acidification. The cost of inaction to climate change is expected to be far higher than the cost of adapting, with the losses to fisheries caused by each hurricane in the millions of dollars, from lost and damaged gear, vessels, equipment and facilities, as well as loss of lives and livelihoods. There are few studies on the costs of adaptation, and while these are expected to be high, they are less in the long term than the
damage expected from climate change. There are several barriers to adaptation in fisheries and aquaculture, which can mean that adaptation does not take place or is slow to be implemented. A considerable adaptation deficit exists, with financial, technical, institutional and governance dynamics hampering efforts. There are also many social factors that may inhibit adaptation of governments and fishers. Further studies are needed in the Caribbean to better understand these social and economic factors that obstruct adoption of adaptation measures, and to inform strategies to facilitate adaptation. This report identifies a number of priority research gaps that are needed to successfully implement adaptation measures in the Caribbean region, including to identify climate vulnerabilities and risk, improve fisheries management, build sustainable aquaculture, improve the marine environment, diversify livelihoods in the long term, and build adaptive capacity. Actions are also proposed which can be carried out in the short term with limited resources, including by fisherfolk, marine managers, and coastal communities themselves. Some of these build on existing work or replicate successful projects elsewhere. Longer term goals are also identified, which need further investment or supporting legislation to implement, but are needed to ensure that fisheries and aquaculture have a sustainable future in the Caribbean. This includes reducing the existing pressures on the environment so ecosystems can be resilient to climate change. For all adaptation actions, research, and capacity building, it is vital that the fisherfolk and coastal communities are involved at every stage. Particular attention should be paid to gender equality, inclusion of youth, marginalised groups or minorities, and the role that adaptation plays in reducing poverty. Traditional knowledge and culture must be included and used to inform action, and communities must be involved in policy development and planning, giving them skills to be involved in ecosystem-based management and co-management. In addition, monitoring, evaluation and learning should be embedded in the institutional mechanisms for tracking progress, and identifying the roles and responsibilities of the range of stakeholders and institutions.
We hope that the report provides targeted actions on adaptation for the fisheries and aquaculture sectors In the Caribbean region. Action needs to be taken now, and everyone in fisheries and aquaculture can play a part. There is already a lot of work underway, but further action is needed to secure people’s livelihoods in the long term. With the right research, skills and experience, adaptation action in the Caribbean can ensure that fisheries and aquaculture livelihoods are secured for the long term. 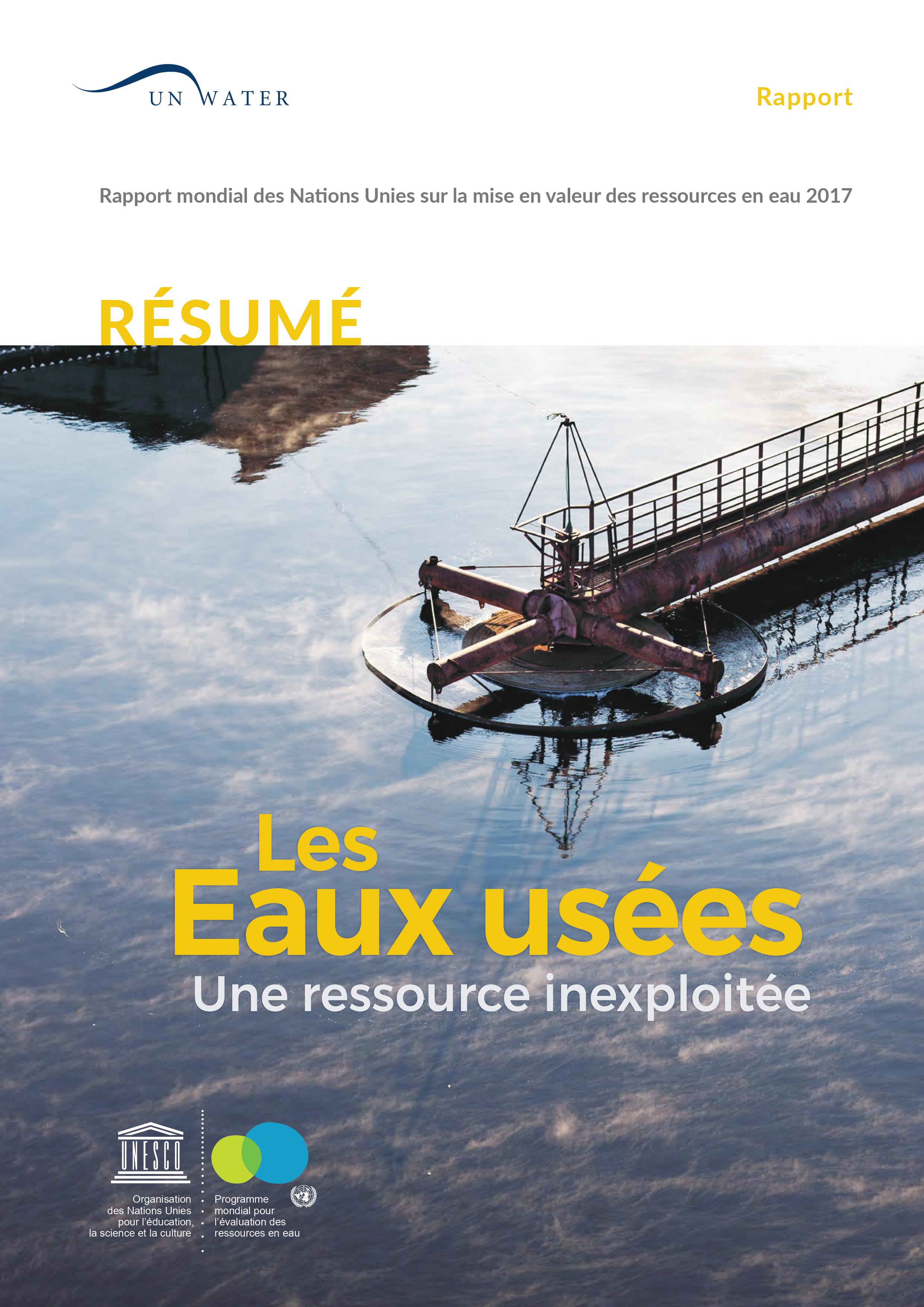 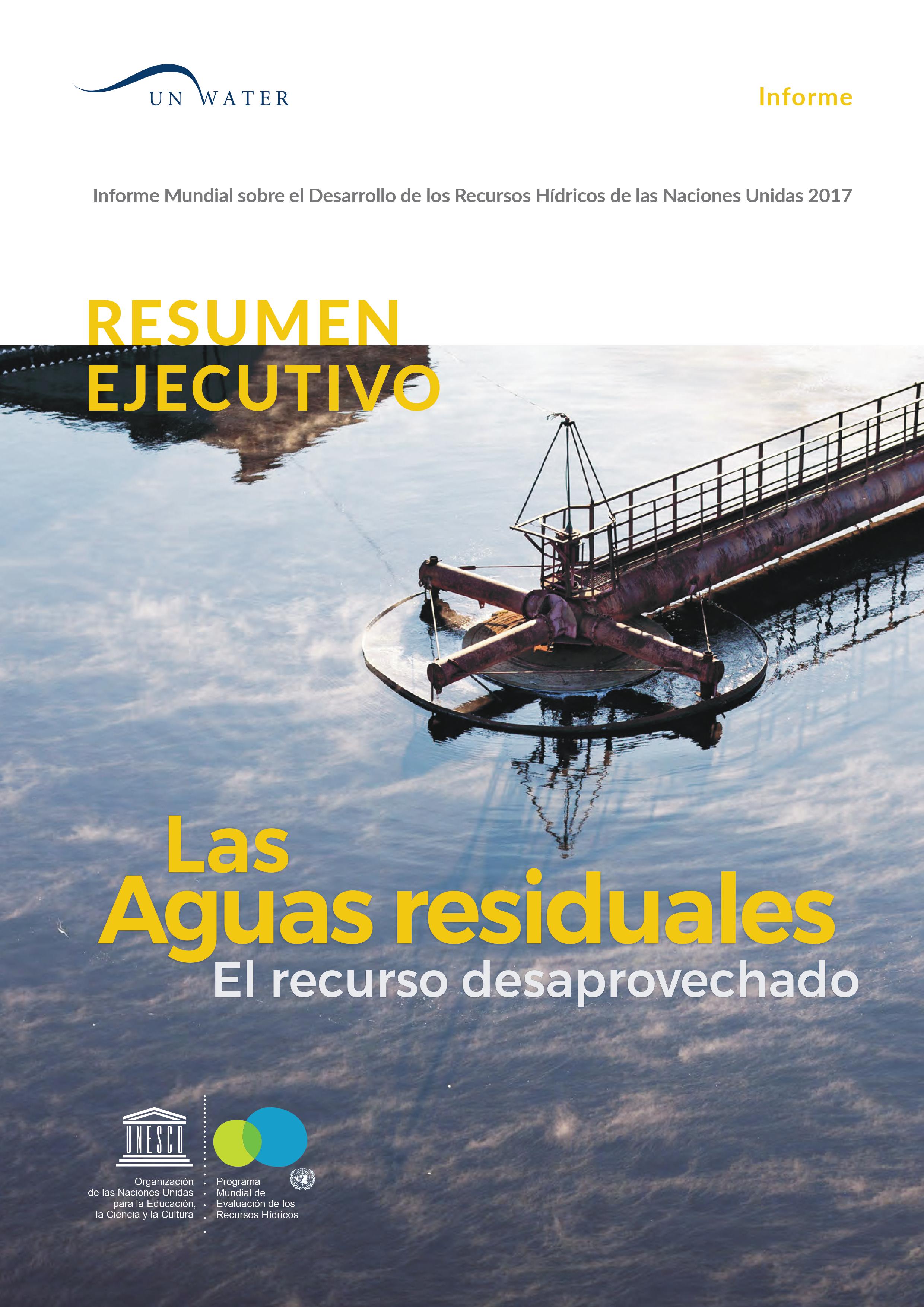